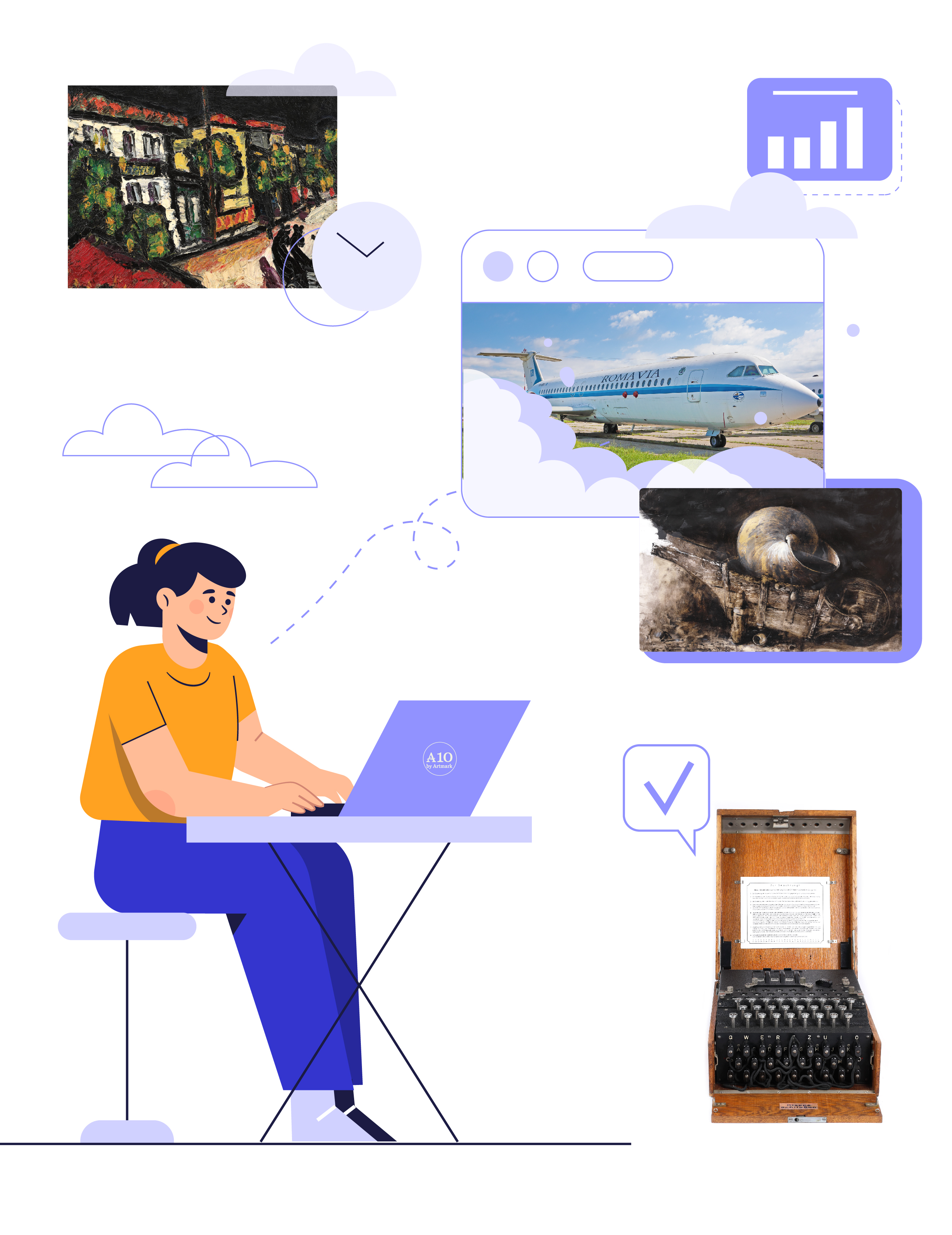 In the chapter of heritage art, auctions remained at the same level - EUR 2.38 million in the first half of 2021 compared to EUR 2.39 million in the first half of 2020, and the lack of an increase is explained by the obvious reduction in the supply of heritage art, given the increasingly rare appearance of important heritage works on the Romanian art market, the supply being naturally limited and most of them being anyway blocked in museums or in important private collections.

* Download the full version of the Romanian Art Market Report 1st half of 2021.pdf 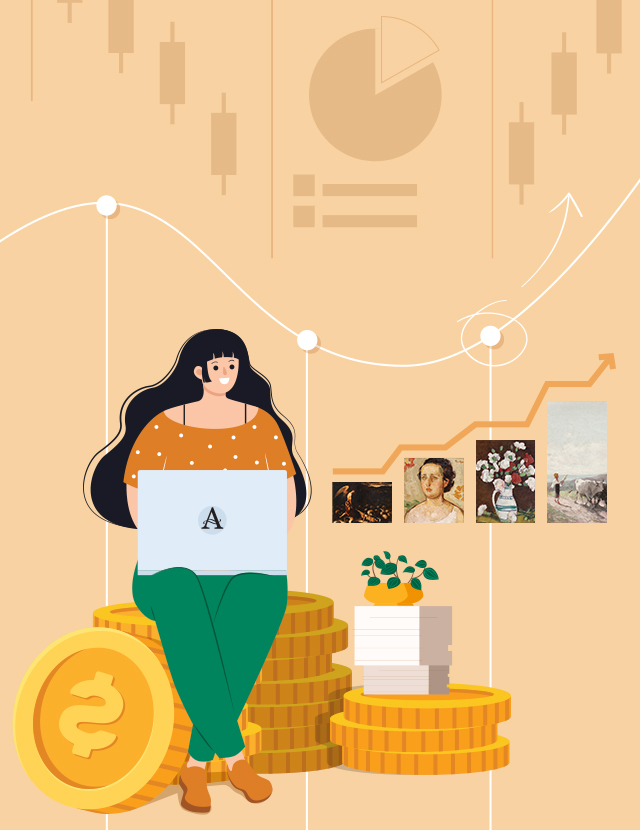 What could be the cause of this market growth? On the one hand, the emergence, in the second half of 2019, of two new auction houses, on the other hand, counter-intuitively, the increase in demand for art, more and more Romanians having more time available in 2020 to search online and find the still very accessible level of Romanian art quotations in the emerging Romanian art market.

In correlation with the doubling of the number of charitable auctions, in a year that disoriented, disheartened and challenged, but also with the increase by 20% in commercial transactions in what concerns art and collector's items - probably counter-intuitively, for most of us - we can conclude that in moments of tension, many Romanians have opted more clearly for fundamental and sustainable values, such as art, cultural identity, national history - and, last but not least - charity. Summarizing the figures, we can conclude that in 2020 the average Romanian has become (or proved to be) 30% more empathetic and more culturally refined.

* Download the full version of the Romanian Art Market Report 2020 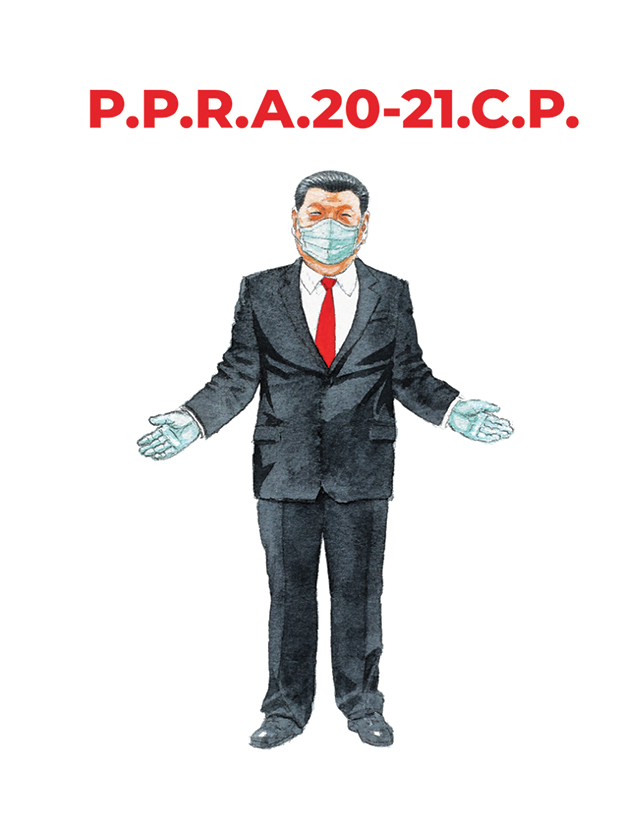 Like beauty, art is in the eye of the beholder. It is the people who give it meaning and value, which is why cultivating the relationship between artists, art and audiences and reinventing it over time is essential, as one element cannot exist without the others.

Both the general public, collectors and companies seek to find themselves in artistic creations, whether by visiting exhibitions, buying works for private collections or communicating brand values through corporate collections. The motivations of those who seek to cultivate this passion are diverse, but more often than not, passion is at the heart of art collecting. In the context of the pandemic that has affected Romania since the beginning of March 2020, everyone's reality has become different than previously known. Social distancing and the shrinking of economic activity in many sectors, including cultural activities, means that the art world is going through a period of adaptation, rediscovery and search for new ways to keep its audience close.

Art comes off the pedestal and picture rail and moves online - the only way to bring it to public attention today. Never before have people been so connected to the art world as they are now, thanks to the expansion of social media and online communication.

Buying art online, from any corner of the world, became possible with the advent of auction houses operating exclusively in the virtual environment, with this early technologisation becoming an advantage for the art business as all offline activity came to a halt. The motivations for buying art in times of pandemic, however, are different, with passion gradually being replaced by concern for financial security and art becoming more of a long-term investment.

This report aims to provide a brief foray into the events that have led to the continued growth of the art market in recent times, and an exploration of how the new global situation will have a profound effect on everyone involved - from artists, to galleries and auction houses, to the running of art events, as well as the buying process and motivation to invest in art. As in education, the forced digitization brought about by the pandemic and the social distancing measures imposed is also bringing about a paradigm shift in the art world. We aim to ask questions, to analyse from various angles and to compare the current context with that of the economic crisis of 2008-2009, without having answers or advice on how to adapt to the post-COVID19 world, but only with an exhortation to embrace this transformation of all of us. 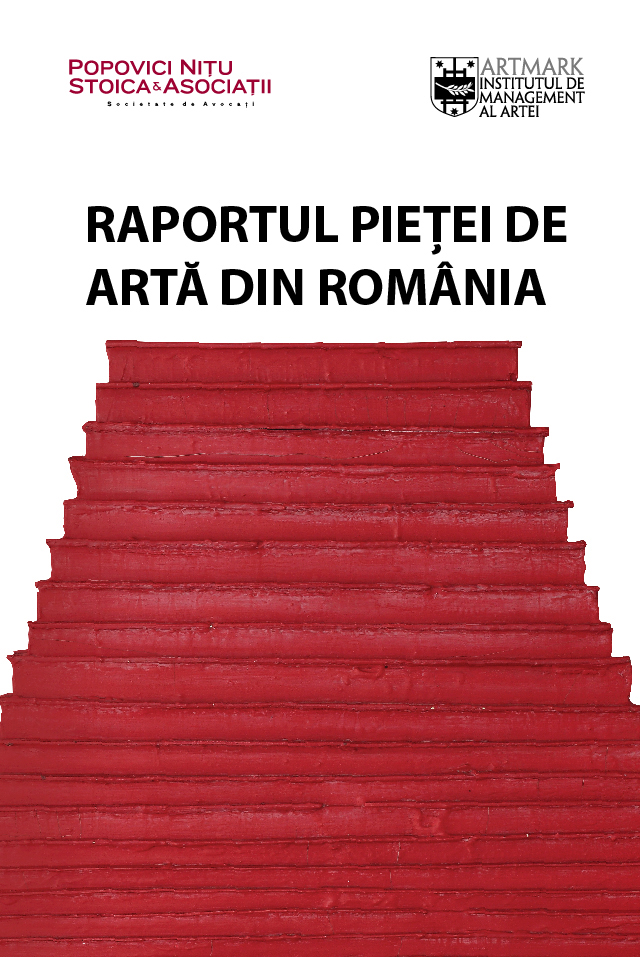 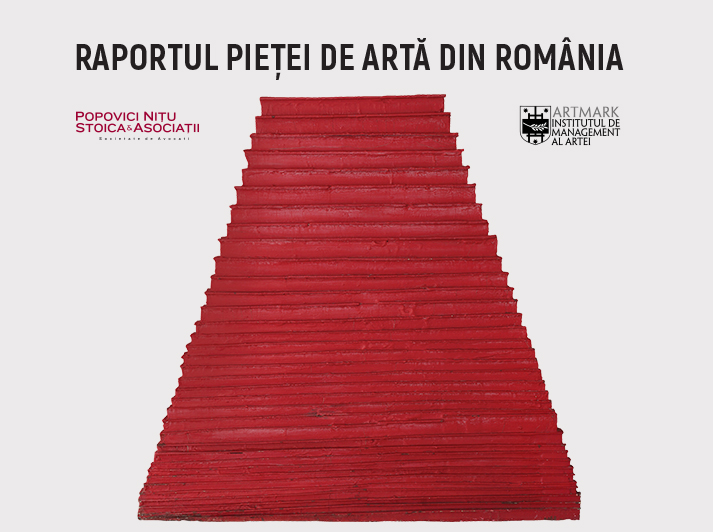 ART IS PASSION. There are several ways to cultivate this passion, and the motivation for any art collection varies. Collectors may be guided by aesthetic considerations and be indifferent to the artistic period to which the work belongs, or they may focus on a particular art movement or group of artists. Some intend to create a museum of recovered and significant heritage, while others aim to leave the collection as a legacy to their children, as an identity education, a witness to the cultural values they believe in. But what all great collectors have in common is their passion for art as a sublime and complex form of synthetic message of a culture, of a civilization they have known and admired.

The art market is constantly changing - and not entirely transparent. Our market report aims to provide as accurate an overview as possible of this market, relying primarily on the precise data that regularly results from auctions of Romanian art in Romania and abroad. It explores 'macroeconomic' trends in its evolution, providing statistics, highlighting current phenomena and artistic trends in vogue

It should be noted, however, that this market report is not intended to represent and is not a taste guide to personal investment in Romanian art. Each work is unique, with its own identity, its own context and its own history, connoting different cultural values, for which only the final recipient finds the ultimate use. Our aim is to provide you with information and expertise on how you can "navigate" today's complex art world and how to interpret the data that is frequently circulated about this market, which is growing more interesting and international every year.

* Download the full version of the Romanian Art Market Report, 2016 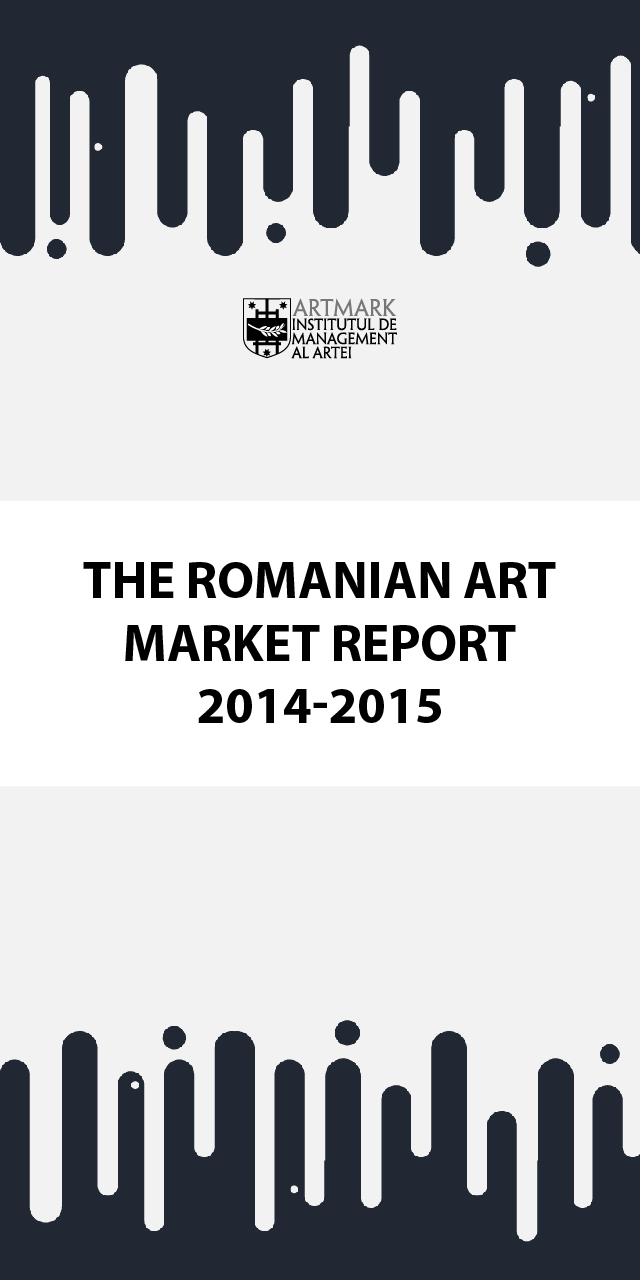 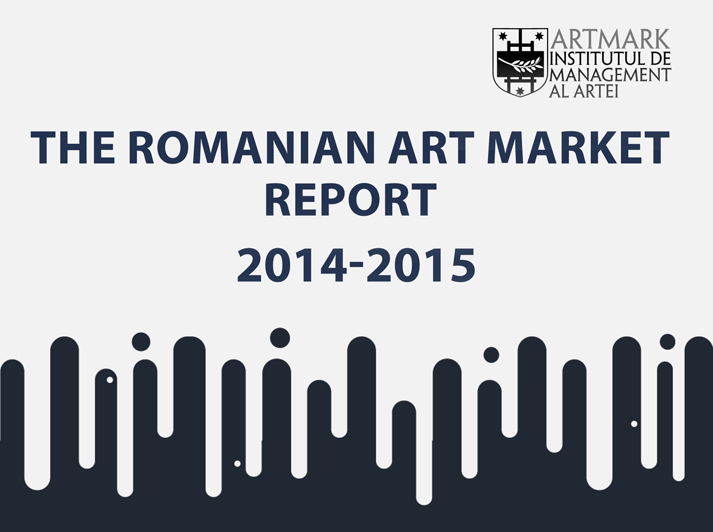 THE ROMANIAN ART MARKET REPORT 2014-2015. As the world celebrates 25 years from the fall of the Berlin Wall and Romania enters its 25th year since the liberation from the communist regime, the young Romanian art market shows contradictory signs.

Starting from scratch in 1990, the first Romanian auction house appeared right after the revolution. Nevertheless, it took more than 20 years for the market to arrive at a first level of functionality, with a firm pool of frequent art buyers, a decent number of operating auction houses, a network of galleries with international exposure and a minimum necessary portfolio of market instruments. With an increased demand in art and growing awareness of heritage values, in the years 2011-2013 prices have gone up exponentially, with public sale volumes increasing from EUR 2.5 mil in 2008 to EUR 15.1 mil in 2013.

2014 - 2015 saw important developments in the number and quality of players on the market. 2014 marked the first Romanian international art fair, Art Safari Bucharest, successfully reiterated and expanded in 2015 and 2016, and the first online-only auction house, Lavacow. 2015 brought the first edition of Art Encounters Timișoara, a one-month biennial event that turned the Western part of Romania into a hub of contemporary art exhibitions, workshops and talks, drawing to Romania international curators, artists and audience. Also worth mentioning is the opening of a handful of new contemporary art galleries and a new space operated by ARCUB (the Cultural Centre of the Bucharest Municipality).

Looking at Romania’s evolution on the international art scene, 2014 and 2015 are filled with accomplishments. Probably most acclaimed is Adrian Ghenie’s success on the international market. The young Romanian artist has entered the international league of elite artists, in July 2014 celebrating his first sale above EUR 1 mil., a price level he has confirmed and widely outperformed ever since, fuelled also by a successful representation at the Venice Biennale in 2015.

Nevertheless, local public art market results do not entirely mirror these developments. 2014 and 2015 registered the first cool down at Romanian art auctions since the fall of communism. While the middle auction market has become more solid, the trophy works lack behind previous price expectations. On the bright side, this contraction might prove a blessing in disguise, as it keeps the Romanian market away from overheating and ensures that in the long run prices grow at a grounded, sustainable rate, with periods of healthy price-adjusting fluctuations around the upward trend.

Speaking of the long term, there are positive signs, with more and more players interested in the Romanian art market. In 2016-2017 we are looking forward to the imminent opening of an important private museum for recent Romanian art, the continuation and expansion of already established international events like Art Safari Bucharest and Art Encounters Timișoara, the inclusion of Romania in the first edition of My Art Guide East Central Europe, but also the more and more frequent visits of acquisition committees from international museums like Tate Modern or Beelden aan Zee, lured by the increased visibility of Romanian contemporary art. 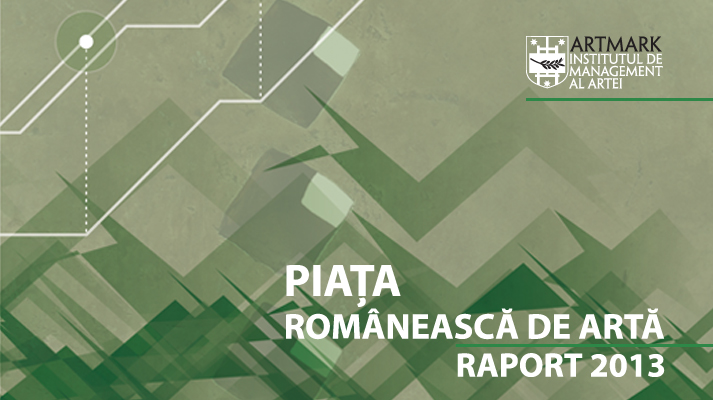 THE ROMANIAN ART MARKET IN 2013 The year 2013 is part of the upward trend on which the Romanian art market started more than 5 years ago. Continuing the spectacular growth of previous years, 2013 was a year in which players in the art market focused on increasing the number of customers by constantly diversifying the offer and through related activities to train and educate the art-loving public.

The art auction market in Romania in 2013 stood at approx. EUR 15.1 million, in an art market that can be estimated at over EUR 28 million. Diversification of supply in the market has led to an increase in the number of transactions, with art auctions seeing 6% more art sold than in 2012.

The main segment in what concerns art auctions in Romania remained the heritage art, especially the creations of artists that possess national importance, creations which still boast the highest market values. The year 2013 brought forth an absolute new record for the Romanian art market: The work "Două fete" ("Two Girls") by Ștefan Luchian was sold for EUR 300.000. While competition at the top of the bidding is usually limited, the most spectacular increases in the auction system are achieved by the classics of the late 19th and early 20th centuries, as well as the established modernists of interwar painting, whose relative accessibility still makes them the most sought after among art buyers.

The surprise of the art market in 2013 was contemporary art, with sales in national art auctions 10% higher than in 2012 (approx. EUR 1.4 million), new author records and notable international successes. But despite significant growth in the last 3 years, the Romanian contemporary art market is still in the process of gradual awareness and appreciation, far from the potential reached by countries in the region such as Poland, Russia, Ukraine, Turkey and so on.

In the top 10 transactions in the Romanian art market in 2013, whose total amount amounts to EUR 1.237,000 (8% more than the total value of the top 10 transactions in 2012), in addition to the great masters, veterans of records in the Romanian art market (Grigorescu, Andreescu, Luchian and Tonitza, who each occupy several positions in the ranking), for the first time there is the vanguardist Victor Brauner, with the work "Poetul Geo Bogza arată capului său peisajul cu sonde" ("Poet Geo Bogza shows his head the landscape with boreholes"). The painting was sold for EUR 120.000 at the Artmark auction in February 2013.

* Download the full version of the Romanian Art Market Report 2013